Home › Ringing Ears › How a Doctor Will Diagnose Tinnitus 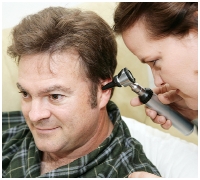 How a Doctor Will Diagnose Tinnitus

Tinnitus is a problem that arises in many people today. It is a condition where the person can hear a ringing or swishing noise within the ear itself. This condition can affect the outer, middle and inner parts of the ear. Many people who suffer from this condition often report that it is worse when their surroundings are quiet. This can be a real nuisance when the sufferer is trying to sleep or concentrate on something important.

Ringing in the ears can be caused by many things. Damage to a nerve, within the ear canal, is one of the major causes for tinnitus. A build up of wax within the ear can also cause the person to hear the ringing or swishing noise. Many older people often have problems with tinnitus because of the onset of hearing loss that is brought on by age. This is usually referred to as presbycusis. Loud noises are another common factor associated with ringing in the ears. Loud sounds can cause permanent damage to the ears and can cause hearing loss. People who have suffered from post traumatic stress disorder are often said to hear noises within their ears, such as the ringing and swishing noises, after having been exposed to loud noises.

Serious health related problems can create ringing in the ears to occur. Meniere’s disease is often associated with tinnitus. This condition is thought to be created by the pressure of too much inner ear fluids. Stress and depression can also cause tinnitus to occur as well as from neck and head injuries. Acoustic neuroma is a type of tumor that is found on the cranial nerve. This condition can often cause the ringing or swishing sound to occur in only one of the ears.

There are also several known types of medications that cause ringing in the ears. High doses of aspirin, some antibiotics, water pills and some types of cancer medications can create a case of tinnitus.

Before the physician can offer a remedy to the patient, for the ringing in the ears problem, they must first research to find out the underlying cause of it.

Doctors will perform many tests on a patient before diagnosing them with tinnitus. The first test the doctor will often have done on a patient complaining of ringing in the ears is an audilogical test. This will test to see if hearing loss is a factor in the noise the patient hears. Physicians will also check the patient’s medical history as well as performing a physical examination on them. They will also run a series of special tests that will help to diagnose ringing ears. One test that a physician often has done on a patient is a CT scan or/and a MRI. These tests are given to rule out any type of problem that may be occurring within the brain.

If the patient has history of high blood pressure or blood clotting, the physician will often have the patient undergo an ultrasound exam, to help rule out these problems as the cause of the tinnitus. This ultrasound will be performed over the patient’s neck to see if the blood is flowing properly through the carotid arteries.

If the patient has a build up of wax that is creating the tinnitus, the physician can do a wax removal to help in the treatment. This can often cure the entire problem of ringing in the ears.

For patients that are diagnosed with blood pressure problems the physician can write a prescription for medication. After the blood pressure is under control the ringing in the ears often comes to a halt.

Plavix is one of the main prescriptions that a physician can treat a patient that has problems with blood clots. If these blood clots are found in the carotid arteries it will create a sound in the ears that many report to sound like a washing machine. If the arteries have a blockage that is more than 75% the physician will often refer the patient to a surgeon to have it taken care of. After the artery is free of plaque and clots, the patient will often cease to hear the ringing or swishing noise within their ears.